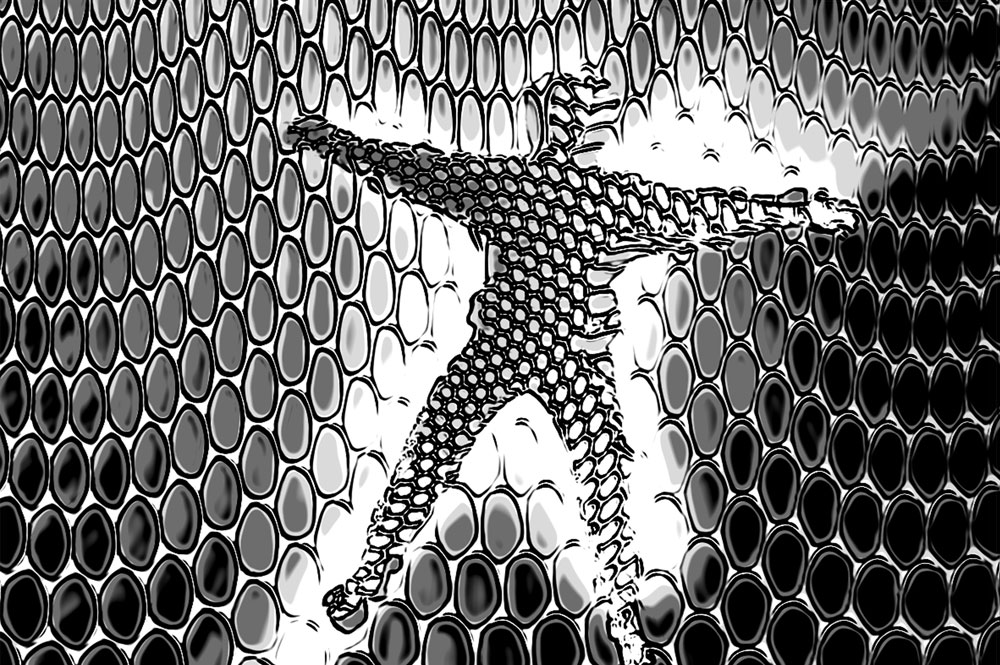 “To prevent alien materials interfering with our engineering, anyone entering the workshop must undergo a decontamination.” I had slipped past this ‘small print’ on the invitation. ‘Decontamination’ meant stripping to nothing and having air at body temperature blasted at me from all directions. After that I was given a one-piece plastic suit to wear. It was grey, opaque, soft and so thin the drafts in the corridor insinuated I was still naked. The engineer’s suit was milky and translucent.

“If you’ve any interest in sound, you’ll enjoy this experience. It’s proof of Marcus’ theories.” She pointed me toward a chair, loosely upholstered in a thin, mustard coloured plastic. The chair was ringed with folds of material; some folds were rubbery, some looked like flesh and others were dark as shadow. In front of the chair was a matt black box like the bonnet of an old car. Beside the chair were two solid, column speakers. Like a studio there was a glass screen with a warm yellow light behind it and the walls were padded.
“OK, the speakers are just speakers but when you sit in the chair your body will become surrounded by little resonance chambers. The seat itself will adjust, as will all the spaces round you. Each resonance chamber corresponds to an organ or interstitial space and will move and change shape till their resonance pairs with a part of your body. It’ll take two minutes.
“Someone, when they sat in this, only then discovered they were claustrophobic. So now we have two kill switches: one in that glove and one activated by a kick. The chair opens immediately and completely. Please don’t worry though. Most people find this device a pleasurable experience.

“The way the chambers grow, move and weave into each other is very beautiful. I have film of it, I can show you afterwards.”
I sat in the chair. The engineer pushed the box toward me. As she did so the folds of material rose up and folded over, so that the moment the box reached my chin was the moment I became enveloped with the softer textiles. It was difficult dealing with the sense of vulnerability. Though the pneumatics were gentle, they were insistent and strong, nudging my arms away from my body and moving my legs further apart. My tension was just turning inflammatory, when she said, “You can stop the process at any time. It will work with the chambers in the position they are but if you can bear with it, these last tiny adjustments make an important subtle difference.
“If it’s dark, it’s better, if that’s alright with you. I’m just going to play a short recording from one of Marcus’ talks.” She switched off all lights apart from a grid of domino l.e.d.s.

The light tenor washed into me and buzzed just below my heart: “Even in a live performance, if you’re not careful, the visuals form a barrier between you and the music. That’s why I close my eyes. Sometimes it’s to cut out other audience distracting themselves and consequently me, sometimes I need to stop myself imagining the psycho-dynamics between performers.” My body moved with a new slow pulse, it was in the same breath pattern rising and falling through his sentences. Each word idea caught a fierce cold energy that shot up from my ribs through my neck to flower round my skull. “There is also a smug look that crystallises on some performers faces, as if music is an intellectual exercise. I absolutely have to shut that out. Mostly I close my eyes just to feel the music in my body.” I was definitely feeling the dance of his words. There was a bass note that he kept hitting, it hadn’t been there at first but now it was setting off a bubbling pulse through my lower back.
“Thinking about this and the impossibility of really capturing the vitality of live sound, I realised that sounds have skin. If you play back a recording, it doesn’t matter how careful or logical you are, you are going to be affected by the format. It is going to have a psychological effect. The warmth of vinyl is a psychological effect. The impurity feels organic but it’s still an impurity. The clinical reproduction of high resolution digital playback has its own connotations, which also interfere with listening. The point is you close your eyes to hear music in your body. Everything I have done in G-Remover is to analyse and then enhance exactly those qualities that resonate physically. We don’t just record the sound. We analyse the body resonances of the sound, so we can enhance it in the mastering process. It means that everything we produce, it doesn’t matter what you play it back on, gets straight under your skin.”
The words stopped. All I could hear was fast panting. I was annoyed. The breathing was breaking through into the hot, whole body pleasure, I was lost in. With embarrassment I realised the heavy breathing was mine.

When I congratulated Marcus on building an ‘Orgasmatron’, he looked pained. “You were breathing air at the time. You don’t call it ‘airgasmatron’. Equating the psycho-physical, autonomic reaction, you had, with sex says more about your small mind than about my acoustic analysis. Get out of here!”

He phoned me later to apologise, explaining he had been having a bad day. He did think my view was a trivialisation but asked me to write it up anyway. “That’s what you press do. What should I expect? I just hope some people see through it.
“It’s ‘G-Remover’ because glistening is evidence of surface.”

Thanks to Mullzimmer for commissioning the visit and VJ flickering light for visualising the effect.
ZQ