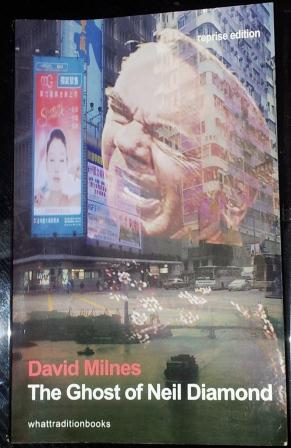 If you’re an actor and want to win an Oscar, get the film rights to this book. The main character, Neil Atherton, an apparently talented, surplus to requirements musician, husband to an economic high flyer, makes a desperate bid for some kind of status. The ensuing tragi-comedy is classic. The falling man’s mind is so dark and rich that the author has to cruelly mock him to immunise the reader against too much empathy. At the end Neil has cast off every vestige of integrity, while somehow accumulating enough dreadful charisma to be awarded a sequel. Please let there be a sequel.

The prose is so clean you don’t notice you’re reading. You arrive in the karaoke clubs of hell, where unctuous performers of ballads, that you can’t listen to without losing all faith in humanity, are worshipped. You are at the extreme edge of the world of Cliff Richard, Neil Diamond, Elton John, Gary Barlow and Robbie Williams. Your own morbid curiosity has you hooked on a formulaic song. You have to laugh.

Neil Atherton leaves “the question of what things” are “worth to the people” who buy them. Economic necessity drives him toward the agent, Chan. Chan appears to have a profound knowledge of the market, so it is reassuring, when he is as fickle as consumer demand. Chan and Neil are two brilliantly exposed amoral people in a transactional dance. They each suspect the other of being the devil and they both want to make the deal.

Neil, scorned by his wife, is deeply unhappy trying to act content. He’s a middle aged man, who never could be cool, endeavouring to be cool. He’s a passable semi-professional singer trying to be a professional Neil Diamond, an impersonator impersonating an impersonator and a broke man acting as if he has money and time. He’s an Englishman, clinging desperately to dignity, who has arrived metaphorically naked in a culture where ‘face saving’ is good manners. Sickly sweet songs and karaoke disco lights colour his grim life.

There is a point, when Neil, on his tightrope walk round the edge of the event horizon of a celebrity circus, calls his “feelings of alienation, the last luxury of those about to fall.” He means we’re all in for it, embedded as we are in a universal culture of mimicry. Here Chan without irony measures authenticity as the degree of emulation; for him using plastic surgery to become a closer simulacrum is a sign of integrity. Karaoke bars are hydra mouths of a global x-factor we are being force fed and force fed into.

Pretending to be someone else “is an inexcusable thing to be doing with a human life.” Unless it’s played for laughs.

To the Coen Brothers, this is recommended.