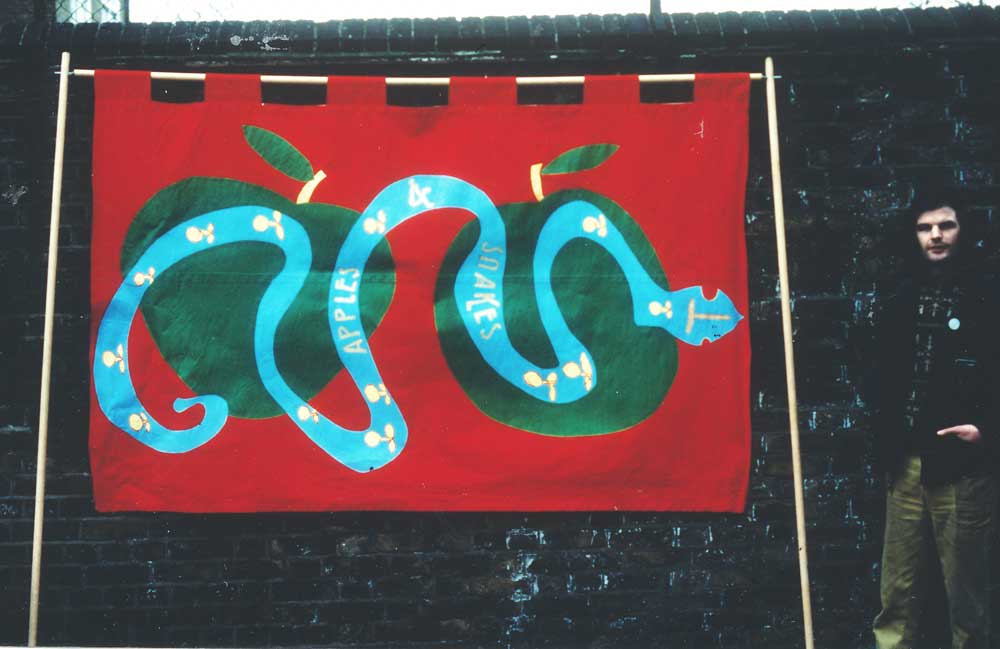 If you follow this link Zolan Quobble & an early Apples and Snakes banner you will find some very kind words by Russell Thompson and evidence of a former life. This was a very intense period, a little bit like now although it is not miners this time and to date the mounted police have refrained from charging into a line of doctors.

The ‘sine qua non’ is flattering. There was a team of sine qua non’s at the time. Especially Mandy Williams, who was tireless and Pete Murry, who tried to keep us rigorous and Berni Cunnane, who was sane. There were also the performers who were extraordinarily generous.

To add a slight corrective, in case you were misled, any idea that I could produce that banner without enormous help from Greenwich Mural Workshop and Stephen Lobb is quite unrealistic. 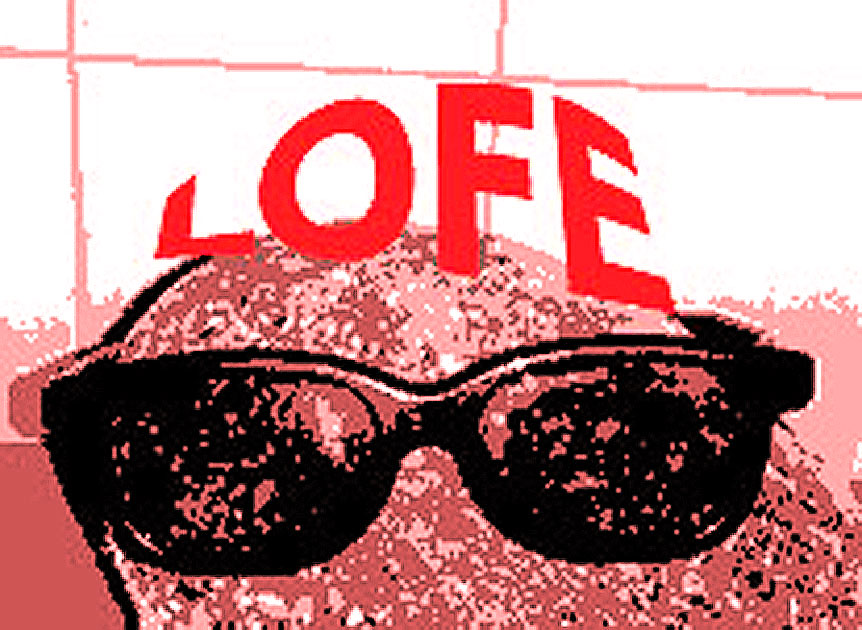 Here’s a sample of the jam that went on a slice of the first Lofe that ever came out of the oven https://soundcloud.com/enq-4/lofe-medley

Zolan Quobble (voice) is a pre-Apples and Snakes performance poet tagged as ‘fractal rap’, ‘true beat’, and ‘shamanic’. He was the voice of One True Dog and is the voice of Rabbidog and Dodmen. Quobble co-founded The Deptford Urban Free Festival when Secretary of the South East London Music Collective. He has 2 books U-I Poems and The Tooth Agenda.

Elwell (bass guitar) was the keyboard player of the matchless Brain of Morbius. He is the guitarist and keyboard player in the comic, two-piece, legend that is Bert Shaft Orchestra and was the bass player in One True Dog. He played electronic percussion in the industrially ambient Foul Geese, and is the man behind Shopping Trolley Promotions. He is a founder member of Silo SE8 Studio and was in at the beginning of the South East London Music Collective.

The questions below came up on the 38 Degree Post. https://speakout.38degrees.org.uk/surveys/bbc-consultation

According to the email, I received, there is till Thursday 8th October to contribute to a Department of Culture, Media and Sport consultation on the BBC. The questions seem designed to provoke pompousness. I apologise for accepting this.

The questions are also written to herd any responses into justification for plans the Government already has. For example you have to accept the Government line that the ‘Market’ is synonymous with reality and that it is a force for good despite global warming, banking crises and a ‘free press’ that is mainly a voice piece for the wealthy.

I am not a worshiper of the BBC, I just think in a world of International profit making Corporations, who don’t pay proportionate British taxes (Google, Apple, Facebook, Spotify, Amazon etc) a British Institution that entertains an audience 18hrs 17mins on average per week is not just vital but incredibly cheap at the price.

38 Degrees want a number of responses quickly.I was as quick as I could be.

How well is the BBC serving its national and international audiences?

The BBC is a huge patron of the arts especially of actors, writers and musicians. As an international brand, it is a great ambassador for the whole of Britain. Like most of my friends, I listen to Radio 4. Radio 4 Extra, Radio 3 and 6 Music. I watch most of the BBC TV channels at some point during the week. Friends from abroad, from the United States and Europe are always envious that we have the BBC. So though it could do better, the BBC is doing very well both nationally and internationally.

Which elements of universality are most important for the BBC?

If there is something going on that is of cultural, political, scientific or economic importance, it is vital that we have a broadcaster, who can straddle the airwaves and the internet and explain and inform us of the activity because that is the broadcaster’s primary purpose. It should not be tempted to self-censor because of the veiled threats of a Charter renewal process If information and elucidation have to justify themselves in terms of a profit margin, editorial standards will inevitably have to struggle against the kind of denominator that confuses public prurience with public interest.
The universality of the BBC should be a protection against commercial broadcasters endeavouring to monopolise and hold to ransom cultural or sporting events behind a paywall (or subscription).

Is the BBC’s content sufficiently high quality and distinctive from that of other broadcasters? What could improve it?

BBC documentaries consistently set standards. Not only is the photography often exceptional but the commentary is simple, clear and informative, without being patronising. This latter is a feat other broadcasters often seem unable to achieve. The number of honours the BBC wins for its output from the The Radio Academy Awards to BAFTA speaks for itself. But a crucial factor in the production of good work is having the room to experiment and learn. This is where the BBC can lead the way in discovering talent, formats and even technology (such as the i-player) that commercial broadcasters can recruit. emulate, modify, improve upon and export. Time and again the BBC has enriched the media world with startling programs such as The Blue Planet. Doctor Who, The Office and House of Cards. And now the BBC online has added to broadcasts a rich dimension of links to its online content and the World Wide Web . At some point the web and broadcast media will be the same thing. The BBC has already shown some of the way and should remain a home for media research and development and program innovation.

Where does the evidence suggest the BBC has a positive or negative wider impact on the market?

One of the great things about the BBC is that it can stand above the often trite dictates of the market. It keeps alive notions of public service. It distributes art and journalism because they are vital resources not because they are commodities to be bought and manipulated by the wealthiest. By its existence and its range it demonstrates an authentic connection between entertainment and education, that embraces its serious programming. The positive effect on the market is that It sets standards that commercial channels have to compete with, ensuring a much higher levels of professionalism in broadcasting than our relative small market size in the UK could otherwise maintain. This applies as much to online as well as to traditional broadcasting. The BBC is probably the main reason why our creative industries are as exportable as they are, contributing considerably to the balance of payments. This ‘financial benefit’ does not include taking account of the simple positive influence of the British brand that is the BBC.
Keeping the BBC funded as an innovative program maker leads to lucrative spin offs for other industries. This has already happened in the video gaming industry with BBC investment in computing in the 1980s and could well happen again with the introduction of the BBCmicrobit.

Is the expansion of the BBC’s services justified in the context of increased choice for audiences? Is the BBC crowding out commercial competition and, if so, is this justified?

The BBC is British but it has to exist in a world of massive corporations like Google, Facebook, Amazon, Spotify, Netflix, News Corp and 21st Century Fox. To suggest that it is crowding out commercial competition is to look at the media market through a telescope the wrong way round. The fact that it is non-commercial in the UK leaves the commercial channels the rest of the potential advertising and sponsorship market to draw income from. The way to look at the BBC is surely to see it as protecting the culture, which generates the people who keep the UK’s media industry alive in the face of growing global monopolies based outside the UK.
Is it really increased choice for audiences? So many channels are simply reshowing old programs or selling gambling or working as shop fronts or running lazily scripted reality programs or even broadcasting soft porn. How much quality programming is being made in this increased choice? The BBC should be encouraged to expand across media to prevent vested interests developing monopolies and keep other content providers up to the mark.

Has the BBC been doing enough to deliver value for money? How could it go further?

When you actually measure the number and range of programs and information you are entitled to through your licence fee compared to a TV subscription package, the BBC is extraordinarily good value for money. This is without considering the more general public service aspects, including the global coverage of news and the soft power of the BBC flag. It is also really important that British cultural events including sport and the arts do not divide up and become available only in various, competing commercial interest empires.
I would like to see more scientific understanding among the journalists and commentators.

How should we pay for the BBC and how should the licence fee be modernised?

The licence fee is established and understood. To change it for the sake of ‘modernisation’ does not seem a sufficient reason to cause a major disruption.

How should the relationship between Parliament, Government, Ofcom, the National Audit Office and the BBC work? What accountability structures and expectations, including financial transparency and spending controls should apply?

The role of the BBC Trust appears to be to oversee the BBC on behalf of the licence fee payers. This is unarguably good. The trust though does not appear to have to defend the BBC on behalf of the same licence fee payers. If the BBC was guaranteed its place as an essential national institution, this would make sense. However given the hostile world of other media this is not the case.
Government should keep its hands off the BBC as much as possible. Ofcom, whose board is appointed by Government should also step back. The Charter should be decided by a transparently independent body that cannot be accused of any vested interests. As it stands it appears as if the Department of Culture, Media and Sport will act as prosecutor, judge and jury. At the same time anything said in defence of the BBC is dismissed as lobbying, paranoid and unreasonable.
Of course there should be financial transparency but the spending controls should be part of the BBC executive plan, once the charter has been renewed.